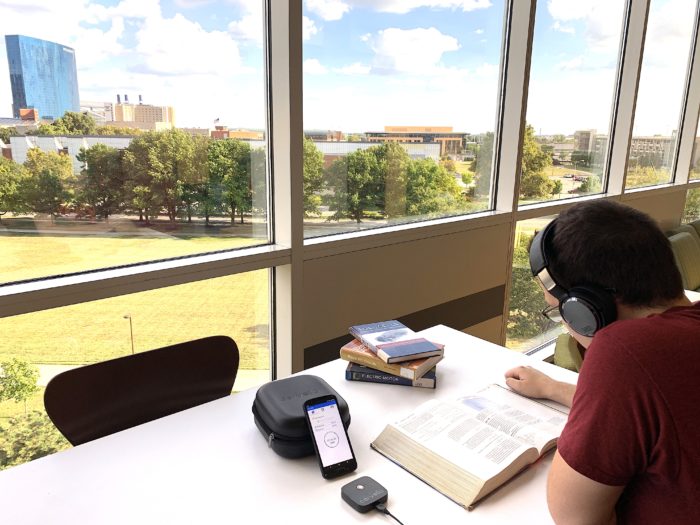 Cervella is an FDA-cleared,  award-winning medical device for non-drug treatment of anxiety, depression, and insomnia. Cervella works by delivering micro pulses of electric current through patient’s brain via conductive electrodes that are integrated into the ear cushions of an audio headset.  Cervella is controlled via an app installed on patient’s smart device (e.g. smartphone). During treatment, which typically lasts 30 minutes, patient can listen to music via a dedicated Bluetooth connection or use the active noise cancellation feature of the headset. In short, Cervella can be used during school, work, study, or play.

You can read some of the device reviews HERE as submitted by Cervella patients. 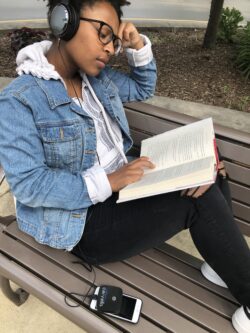 Stimulators transmit small pulses of electric current across patient’s brain via a pair of conductive electrodes placed on patient’s head. CES devices have been in existence for several decades and are approved by the FDA for treatment of insomnia, depression, and anxiety. They exhibit good efficacy, do not present significant side effects, and they are not habit-forming.

Cervella is a good alternative to drug therapies, especially for patients that respond poorly to anti-depressant drugs or experience significant side-effects with drug-based therapies. Cervella can be also used in conjunction with drug or cognitive therapies making it an excellent adjunct device.

According to clinical and research studies, the micro current that is delivered by Cervella has several effects on the brain: it affects the Default Mode Network (DMN), alters the endogenous brain oscillations, and causes change in neurotransmitter levels such as serotonin and beta endorphin. The effectiveness of cranial electrotherapy stimulation for treatment of anxiety, insomnia, and depression is well-demonstrated through numerous clinical trials conducted over several decades.

During a treatment session, which typically lasts 30 minutes, patients suffering from anxiety, insomnia, and depression will experience reduction of anxiety immediately post-treatment and improved sleep patterns (insomnia reduction). Longer-term use has been clinically validated to have a positive effect on reducing patient’s depressive mood.

How does Cervella compare to drug-based therapies? 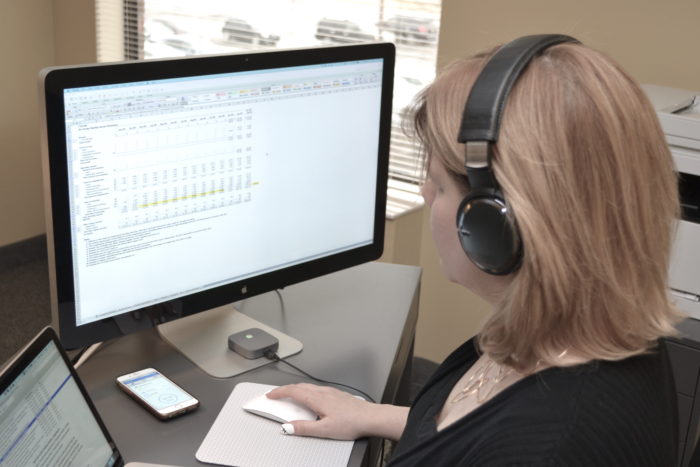 First, Cervella is quite effective, especially for treatment of anxiety (and often accompanying insomnia). According to 38 clinical trials, the average improvement rate for patients using a cranial electrotherapy stimulator is approaching 60% as compared to approx. 20-30% for various types of anti-depressant drugs.

Second, unlike many antidepressant drugs, there are no serious side-effects from using CES, and the Cranial Electrotherapy Stimulation is not addictive or habit-forming. In 2007, the FDA has mandated the use of black-box warnings for antidepressant drugs in young adults (18-24 years old) to warn patients and physicians about an increased risk of suicidal ideation and behavior in teens and young adults. Cervella does not have any significant side-effects and can be used (with adult supervision) by teenagers and adolescents.

Lastly, CES devices can be also used as an adjunct therapy or combined with other drug-based or non-drug therapies ( e.g. Cognitive Based Therapy) in order to maximize the overall chances of successful treatment.

In sum, CES devices are especially suitable for patients who either respond poorly to SSRIs (ineffective treatment), exhibit significant side-effects with antidepressant use, or who want to try a non-drug approach first.

What makes Cervella different from other CES devices available on the market? 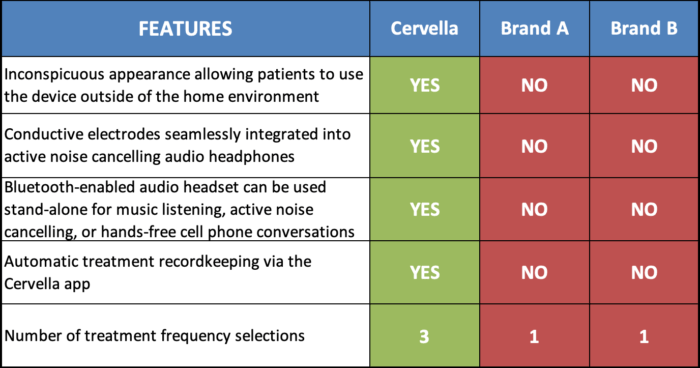 Cervella is the world’s first and only Cranial Electrotherapy Stimulator with patented proprietary conductive treatment electrodes that have been seamlessly integrated into a stereo headset allowing patients to receive treatment during study, work, or play. Other CES devices all use traditional electrodes (placed conspicuously on patient’s forehead or clipped to earlobes) relegating the use of the other products to patient’s home or doctor’s office. Unfortunately, anxiety attacks can and often do occur in public. Cervella is not easily distinguishable from ordinary over-ear stereo headphones, which makes it suitable for treatment outside of the privacy of patient’s home. In sum, Cervella is designed to fit into a patient’s lifestyle, not the other way around.

Furthermore, Cervella is the first and only CES device that is managed through an App on a smart device. This feature allows for automated treatment data recording, treatment reminders, and cloud integration. It also gives the patient an option to easily share treatment data with his or her health provider in order to better manage the treatment plan.

How do I setup and operate the Cervella device?

Please watch the following video and read your Owner’s Manual completely prior to use. 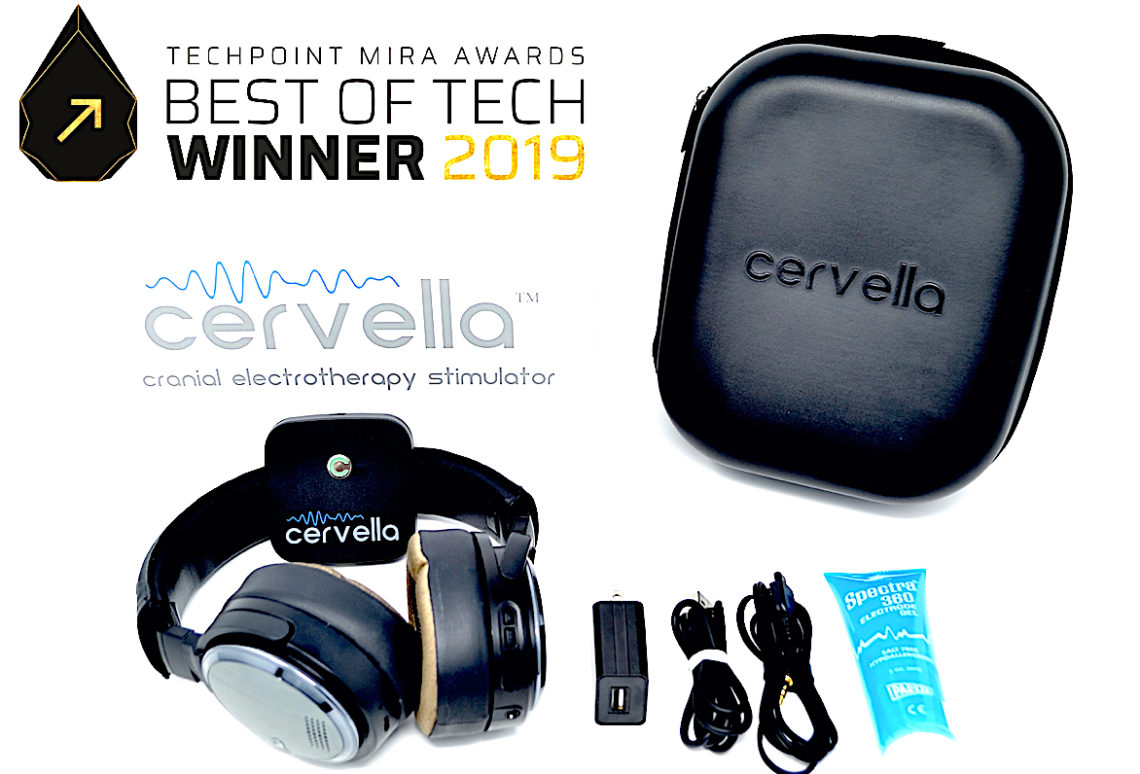 Winter SALE - SAVE $100 - Purchase Cervella for only $595 and take advantage of our 30-DAY trial. Sale subject to availability. See Terms and Conditions for details. Dismiss